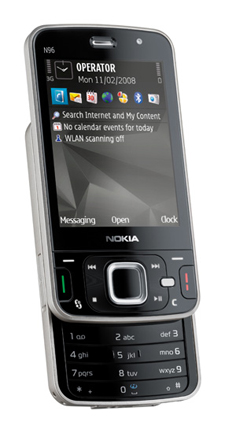 Nokia’s suddenly entered the MWC game, with their N96 causing a huge buzz over in Barcelona.

It’s got a – get this – 16GB internal memory capacity, alongside a microSD slot. Perfect for storing photos taken on the 5-megapixel camera with Carl Zeiss optics lens, flash and video light, and videos which are taken at 30 frames per second. The ability to geo-tag your photos using the A-GPS system is also touted by Nokia as being a major draw to the handset.

Dedicated media keys and integrated 3D stereo speakers will allow for some nice music playback, otherwise with a DVB-H TV tuner you can watch telly and even store up to 40 hours of it, or other MPEG-4, WMV and Flash files.

As you’ve come to expect with high-end Nokia handsets, HSDPA is included, alongside their own Maps and City Guides features.

We’ve been told to expect it around Autumn for €550 exclusive of taxes and subsidies.

Related posts
Microsoft taking Nokia out to lunch – the subject? Windows Mobile world domination…
Nokia does away with the N-Gage handset entirely, offers N-Gage application for N81
Nokia signs up with WWF and promises energy savings