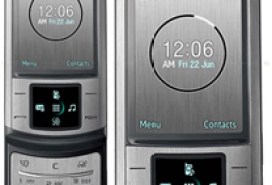 Just sneaking in prior to the start of the Mobile World Congress next week in Barcelona, Samsung has announced the launch of ‘Soul’, which is an acronym of ‘The Spirit Of Utra’, named in honour of the completion of its ‘Ultra Edition’ series of handsets.

Set to be a major feather in Samsung’s cap, the slim and lightweight handset has features such as Magical Touch by DaCP, which adapts the keypad and menus to the user’s habits, making the navigation unique to your usage.

The 12.9mm thin quad-band GSM handset also has a 5-megapixel camera and 4x zoom with features normally seen in a point and shoot camera, like face detection, image stabilisation and a Wide Dynamic Range. HSDPA, mobile blogging, RSS feeds, and a music library also are thrown in for laughs. The storage capacity isn’t mentioned, however it is expandable via a microSD slot, however miniscule it is.

Expect Susi and Stuart’s full coverage of the phone next week at the Mobile World Congress event.