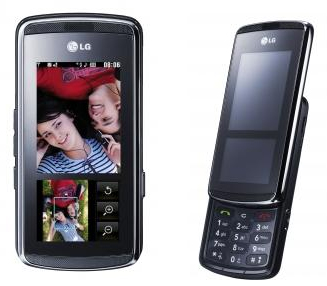 LG is cranking out the touch-screens like there’s no tomorrow, with the KF700 having not one, not two, but three touch-sensitive displays.

Being touted by LG as a multimedia handset, the three touch-related input methods – the 3.0″ touch-sensitive screen, an alpha-numeric keypad and shortcut dial. HSDPA connectivity, video playback and a 3-megapixel camera are all added bonuses.

It’ll be available mid-March for the whole of Europe, with the rest of the world to follow.

As leaked last week, the KF510 fashion handset has a 3-megapixel camera, and can record QVGA video, with image stabilisation, an LED flash and red-eye reduction. Not only that, but an MP3 player is also featured.

Susi managed to grab a video of the KF600 earlier today, but here’s a closer look.

Looking very similar to the Prada and Viewty, the KF600 uses two displays, a normal screen, then smaller touchscreen which uses what’s called an ‘InteractPad’, or touchscreen virtual navigation keys which change function depending on the application being used. Not only that, but it also vibrates slightly and makes a clicking sound when enabled.