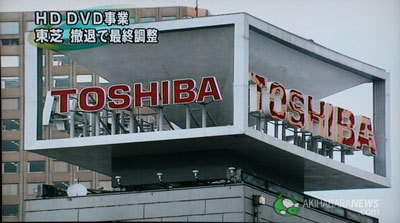 I don’t have access to Japanese TV, but according to Akihabara News (which does), an announcement has been made on the future of HD DVD – it’s been killed off by Toshiba.

That’s not official, but Japanese TV network NHK claims the end of HD DVD will be announced in the imminent future, hasted no doubt by the succession of manufacturers and retailers backing out of using the format – Walmart was the most recent high-profile company to ditch it on Friday.

No doubt we’ll have the official statement this week, but just in case you’re tempted by that budget high-def player in the shop window…well, maybe think twice.