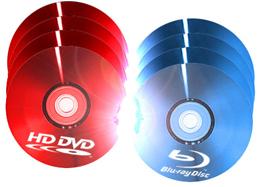 The HD DVD camp has hit back to today’s reports that the millionth Blu-ray film was sold…by announcing 750,000 HD DVD players have been purchased so far.

The poor underdogs must be getting forgetful in this deadly competition, as they actually announced back in July of this year pretty much the same story, that HD DVD players were outselling Blu-ray players three to one.

Included in the sold units are stand-alone players plus external Xbox 360 HD DVD player add-ons. If you’re wondering about the exact figure of Blu-ray players sold, well, wonder on, as the Blu-ray Disc Association is yet to release those figures.

Sometimes I do wonder whether I’m backing the right side – it’s hard right now, being a HD DVD fan when the BDA flood the tubes with so many attractive looking figures like owning 73% of the HD disc market in Europe.