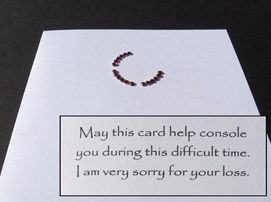 Gary has been busy skiving, err, sorry, scouring Etsy for homemade goodies over at Xboxer, and uncovered this condolence card for unfortunate souls plagued with the Red Ring of Death virus. You’d think once the situation got this bad, where people started making bloody cards expressing their sorrow over the 360s breaking down, Microsoft would wake up and realise something might indeed be wrong with the machines they’re shipping.

But noooo. Owners are still reporting their Xbox 360s are facing the same problems since launch, and Microsoft is still taking an age to send the refurbished RRoD machines out in replacement. It looks like we’ll be seeing a lot more of these condolence cards in the future, so good thing they’re just $4 each from Etsy.

RRoD cards on Etsy (via Xboxer)

Update: Whoops, looks like they’re all sold out now. Guess the problem is even worse than we anticipated!