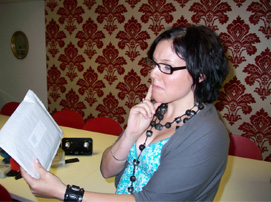 Yes, usually, I hate the unnecessary swag. But this Xbox 360, Halo 3 Edition padded envelope, is pretty much the best set of press junk I have ever seen. The padded envelope is printed with my name, and work address. There are two limited…err…um….errr…Here comes the unboxing…er unbagging.* 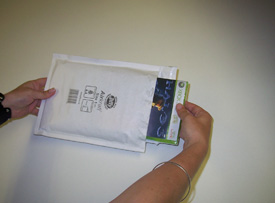 So this is me sliding the game out of the padded envelope, with bated breath. Could it be…is it…my god! It is! It’s the Saviour! The Game Of The Year! The game which will secure Microsoft’s crown as Console King! My god! Look at the shiny, clear plastic, stretched over the most handsome lime-green case you’ll ever own. I can hardly believe it…it…it…it’s beautiful…. 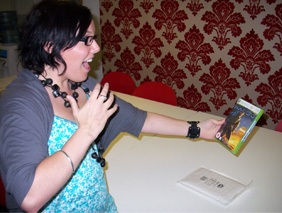 Obviously I can scarcely contain my shock at holding something so beautiful, the final chapter in the Halo trilogy. Shortly after this photo was taken, I wept arogant tears of joy at being one of the first in the country to hold such a thing of beauty, something so important it should be locked up in the Tower of London alongside the Queen’s Jewels. 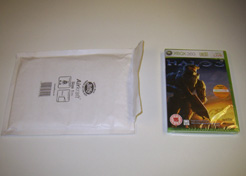 The back of the padded envelope, and the front of the case! Marvel in its beauty, its elegance! 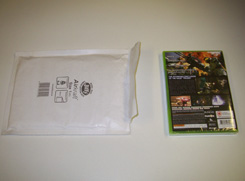 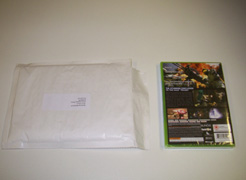 A risky photo, the padded envelope upside-down front shot, combined with the backside case shot, but I think I manage to pull it off perfectly here – it’s HALO 3, FOOLS, anything can be pulled off with one of these bad boys! 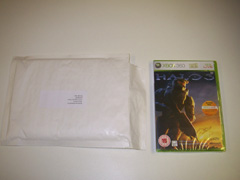 The final shot in the unboxing of THE MOST IMPORTANT LAUNCH IN GAMING HISTORY, the padded-envelope-upside-down-front-shot used in conjunction with the front-pose of the case. Remarkable. 10/10. This unboxing will go down in history. 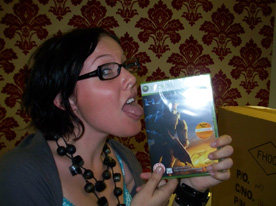 *Yes, now obviously this is a parody of Gizmodo’s unboxing of the game. But it’s also a neo-satiric juxtaposition of consumerist culture’s attitude to new products, allied to a marxist interpretation of the Jungian dynamics of review samples.**