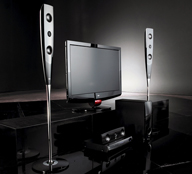 IFA is well and truly over, with most Berlin-bound geeks back in their natural habitats, in our case, Shiny Towers. If you missed our coverage last week, and over the weekend, here are the top five most news-worthy stories. Expect these products to be rolled out over the next few months.

2.) Samsung’s BD-UP5000 – Samsung are touting this model as the world’s first proper HD-DVD and Blu-ray player. You might remember that LG’s BH100 wasn’t compatible with both BD Java and HDi so failed to play the interactive extras you get on discs. Not only does the BD-UP5000 do this, but it also supports Dolby Digital 7.1, Dolby Digital Plus and Dolby True HD. Launching in the UK at the end of the year, it’s bound to be a huge success due to its genuine dual-player capabilities.

3.) Sharp’s prototype LCD TVs – ok, they’re just a prototype for now, but as they’re apparently going into production next year, I’m including them in this list. I mean, geez, they’re only 20mm thick! Not only that, but they have a contrast ratio of 100,000:1 and weigh just 25kg.

4.) LG Viewty – we’re banging on about this phone constantly, I know, but it really is THAT good. It’s got a 5-megapixel camera and is similar in looks to the LG Prada, only not as fashionista. Love it.

5.) Philips’ Aurea – Philips impressed many people with their Aurea range of TVs at IFA, which promises to ‘revolutionise’ television by using a gorgeous ambient light with the screens. Perfect for the boudoir bedroom.