LG's Viewty range were once at the fore-front of smartphone tech, selling like hot-cakes back in 2007. But with handsets throwing everything but the kitchen sink in as standard these days, LG's once cutting edge approach to mobile internet…

Word has just landed that the LG Viewty II will hit the UK in June. The news trickled through Orange that the 8-megapixel snapping, 3-inch WVGA touchscreen device was to get a Q2 release and it’s since been refined as just two months’ time.

The original Viewty, which is still available, is one the most successful handsets to come out of the company quickly pushing their way up the mobile phone ladder and this handset with its 32GB storage and 3D LG Arena-like interface could be their next big push in the mould of the Chocolate, the Cookie and the first Viewty itself.

No word on price or network exclusivity as yet but expect news soon as the companies involved look to settle the talk.

Here’s another 8 megapixel cameraphone in this (rather pink) video from Zara. We covered it in its KC910 incarnation here. The Renoir can record video at 120fps, which is rather mighty, considering it’s a phone. It’s a touchscreen, and comes with GPS. Very nice, indeed.

LG has today released the scoop on its latest handset that’ll be hitting our shelves in October. The LG KC910 is aimed squarely at the same market as the Viewty and it’s the first fully-touchscreen 8-megapixel camera phone…

Yup, according to Akihabara News, who claim the specs will remain the same as the previous model, and should land in Europe sometime within the next few weeks.

Considering the phone’s definite ‘fashion’ appeal already in just the black and silver colourways, I can’t…

The things I do to review camera phones for you lot! I’m a tad bit scared of heights, yet I just went up the famous London Eye to test five of the best models money can buy you. Featuring the Nokia N95, LG Viewty, Samsung G800, Sony Ericsson K850i and Apple iPhone, which do you think will succeed in taking the best shot of the Houses of Parliament?…

It’s Friday, which means it’s time to show you a brief look at what’s been going on over at our CityClickers moblog, created in collaboration with LG.

Those European mobloggers of ours have been busy with their LG Viewty handsets, sending in snaps of graffiti in the Netherlands, a French rainbow and our Spanish moblogger has even posted some pics of him dressed as a hippy, Superman and a Viking. Glad someone’s got some time on his hands…! 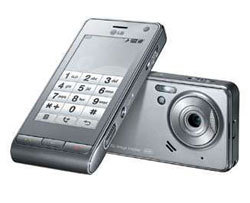 LG claims it has shifted 550,000 of the original black Viewty handset – reason enough to launch a new version, this time in what’s described as a ‘dark silver’.

You may recall that over the last couple of months we ran a competition, CityClickers, to find the best mobloggers across Europe. In association with LG and Moblog.co.uk, the winners received LG Viewty handsets and their phone bill paid for two months – all for just photographing the stylish people and places from their country. 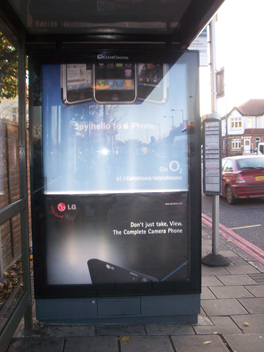 We’ve all heard about the Viewty handset from LG, and it’s reputed iPhone killing skillz, why, I bet we’ve all heard the story about when the two met in that dive bar down in Hackney and the carnage caused by the spec’d up Viewty. Well. It appears the general public thinks the phone is pretty special too, as it’s sold out in Europe in less than a month.