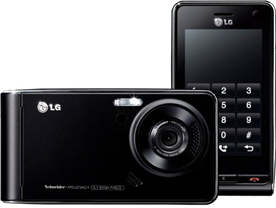 O2 might have signed an exclusive deal to sell Apple’s iPhone in the UK, but the operator appears to be hedging its bets by also signing up to sell LG’s Viewty – one of the iPhone’s fiercest rivals.

However, O2 won’t be the only UK operator selling the Viewty – they all will. That’s what I found out during a visit to LG’s Seoul demo centre today, anyway. Besides giving a hands-on demo of the Viewty, LG said that it’ll be sold through Vodafone, O2, Orange, T-Mobile and 3 in Europe, and showed a model that was branded as O2.

The O2 angle is really interesting, especially when we see how much O2 sells the Viewty for, in comparison to iPhone’s £269 price tag.

We’ve written about the Viewty’s features before, and Susi shot a video back at the IFA show. So I’ll just add my impressions from this morning’s demo. LG showed off the handset’s TV-Out feature, playing the trailer for the ‘300’ film on a 42 or 50 inch display (I couldn’t quite tell which).

It was awesome considering it was coming from a phone, although with a decent TV, I’d still rather be watching the HD DVD or Blu-ray version, if I’m honest. LG is also proud of Viewty’s 120 frames-per-second video recording capabilities, and was showing off its slow-motion playback to prove it.

Us bloggers can bang on about Viewty being an iPhone killer, but LG isn’t overtly fuelling the comparison, saying it sees Viewty as more focused on photography than music, with its five-megapixel camera.