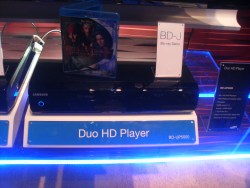 Samsung, more than any other company ever, loves its world firsts and surprise, surprise IFA is teeming with them. The one that is getting the hacks most excited is the BD-UP5000 Duo HD player, which it is billing as the first ever dual format optical high definition player. By that it means the first to have both Blu-ray and HD DVD players on board.

In reality Samsung is taking a liberty or two as LG got there first with the BH100. The big difference is that the Samsung is compatible with both BD Java and HDi which means it can access all the interactive goodies that you get with the disc – the LG can’t. It also has the edge in the audio stakes in that supports Dolby Digital 7.1, Dolby Digital Plus and Dolby True HD.

For the record there’s playback for both Blu-ray and HD DVD at 1080p at between 24 and 60fps. Samsung has also incorporated a new processor – the Hollywood Quality Video system – which it claims delivers a more cinema-like experience.

The player is scheduled to arrive in the UK in Q4 – which I guess means November. In the mean time Samsung has three other third generation Blu-ray players – the top-end BD-P2400, the entry-level BD-P1400 and the HT-BD2, the world’s first (here we go again) Blu-ray home cinema system. All three should be on sale by the end of October. No news on UK price.