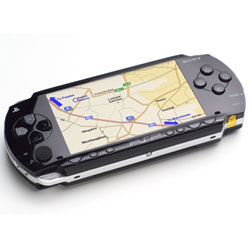 We’ll have to start filing PSP stories under ‘personal media players’ rather than ‘gaming’ soon, such is Sony’s determination to expand its handheld’s non-gaming capabilities.

We wrote yesterday about its Go!Messenger VoIP project with BT, but Sony has also just unveiled plans for a satnav add-on, as well as on-demand TV downloads from Sky.

The satnav package is called Go!Explore, and offers navigation for cars and pedestrians in eleven different languages. The maps will be upgradeable, and you’ll be able to buy Points Of Interest data from Sony’s PlayStation Network, with “other exciting Wi-Fi features” coming in the future. I’m guessing that might be live traffic data.

Meanwhile, there’ll also be a Go!-branded video downloads service in partnership with Sky, allowing you to grab sports, films, entertainment and music shows to watch on your PSP. Sky is aiming to work with other broadcasters to make their content available too.

My previous views on all this PSP convergence still stand, mind. At least until they get the giant squiddy thing from God Of War to provide Go!Explore’s voice directions…

Related posts
Slot your PSP into a cardboard arcade cabinet
Hack allows Nintendo DS games to be played on the Sony PSP
Three extra PSP colours for Japan, including ‘Lavender Purple’ for gran