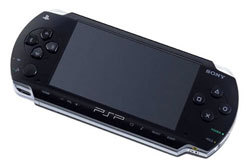 BT and Sony has unveiled details of Go!Messenger, a wireless communications package for the PSP, which will launch in January 2008.

GoMessenger! will offer ‘high quality’ video calls, voice calls and instant messaging from the console, via any wireless access point (home or out and about) via VoIP. The software will be available to all new and existing PSPs, downloaded simply from the web or shared between users. For messaging, a new on-screen keyboard will be available, with a headset and Go!Cam video camera also on sale.

BT will launch the product initially in the UK, France, Germany, Spain and Italy, before extending to the remainder of Sony’s global market. More on this nearer the launch.

Related posts
Slot your PSP into a cardboard arcade cabinet
Hack allows Nintendo DS games to be played on the Sony PSP
Could Sky TV be heading to the Sony PSP?