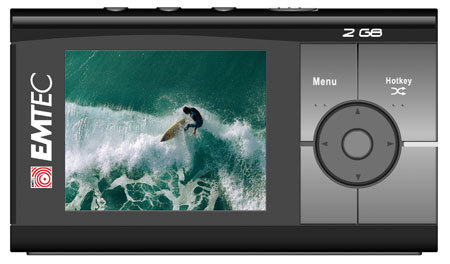 I would associate Emtec more with blank media than media players, but it’s the latter we’re concerned with here, more specifically, the MP4 C230 player.

The MP4 C230 has 2GB of built-in storage, along with an SD/MMC slot to boost further. There’s also a 2.2-inch TFT screen and audio playback of MP3 and WMA files, as well as JPEGs for photo viewing and AVI for video. If you don’t have AVI files on your hard drive, you can download a free conversion program from Emtec.

There’s also an equaliser on board and stereo headphones included, but no mention of power – so it could well be standard batteries. Note also that the player is only compatible with Windows 2000, XP and Vista. Available from next month (primarily from Amazon) for around £65.