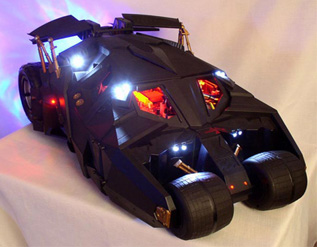 It’s a good time for moddin’ fans alike, as the spec’d-up PC cases are rolling out faster than the creators’ thumbs in a Halo sesh during their slacktime. The big blockbuster films are being represented left, right and centre, and this week it’s the Tumbler Batmobile which has found its way onto teh intertubes.

One dedicated Batman fan cleaned out the insides of a 1/6 scale remote control Tumbler Batmobile car, and then popped in an AMD Sempron 2800+ Central Processing Unit, 40GB hard drive and DVD drive inside. If only he’d kept the RC components in as well somehow, he could’ve then had a semi-mobile PC, that he could race from bedroom to lounge and back again as he works.