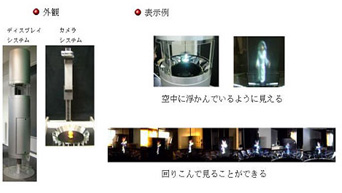 Waaaaaay back when we were impressed with 2MB broadband, 2.5-megapixels in our digital cameras, and no-one could ever possibly imagine the downfall of Britney Spears, Hitachi announced an amazing new piece of technology which promised to revolutionise computing AS WE KNEW IT.

Which to be fair, back then, was checking Friendster every couple of days whenever we signed into out old Yahoo or Hotmail email accounts.

Yes, if you have a brain which hasn’t been sizzled with the strenuous exercise of Big Brother watching, Rosé drinking and procuring all your world news from London freesheets over the last few years, you’ll remember Hitachi promised 3D holographic display technology to one day be churned out of their warehouses to sate our dual-coloured paper glasses-wearing ways.

They’ve just added fuel to the tripped-out fire, claiming they’ve got a new version of the technology which utilises mirrors inside the screen.

Sadly they’ve stated it’ll be available for only schools and museums, so don’t get your panties in a twist with visions of your long-lost high-school hottie on Facebook appearing in 3D holographic technology anytime soon. Oooh…3D holographic pimples, sexy.