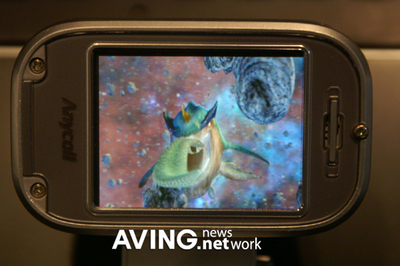 Actually, that’s probably unfair: I have no proof that looking at Samsung’s latest mobile technology makes you go all squinty, and there’s quite possibly several dozen researchers who’d have my guts for garters for even raising the prospect.

Still, AVING has a close-up shot of Samsung’s 3D display, which will remind you of the kind of movies you need a comedy pair of red-green glasses to watch. Do you to use the phone? It’s a bit unclear, even after reading Samsung’s FAQ on its 3D Display website. The company’s been working on it for a while though – as far back as 2004 Samsung was talking big plans for 3D mobile displays.

There certainly won’t be a lack of stuff to watch on the phones when they’re commercially available, anyway. Analysts say 3D films are on the up in the cinema world.