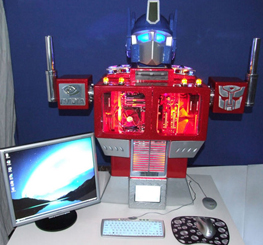 …and no doubt ensure you never get a boyfriend/girlfriend again, once any potential fitties are invited ’round your pad for a little late-night backgammon.

As everyone and their Josh Duhamel-fancying girlfriend knows, a Transformer just isn’t a Transformer if it doesn’t, well, transform. Things have to do what they say on the tin now, otherwise People Get Angry.

So full points to the man stuck in his perpetual ’80s flashback who created the fully customised Optimus Prime PC case. Able to transform from a PC tower to a hulking robot capable of mass destruction – ok, only when Megatron is involved – it took the creator 300 man hours to build the 6’10” tall machine which weighs more than your average Hollywood starlet, at 125 pounds. Needless to say, I’d be scared if I ever met a PC mod taller than myself!

Related posts
Be warned: bootlegging 20 seconds of the Transformers movie could land you a year in jail
Transformers Optimus Prime birthday cake
Animated Transformers t-shirts, not quite as cool as *actually* transforming obviously!