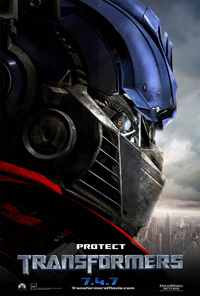 Cripes. Cinema ushers in Britain love any chance to get officious with punters, especially if they suspect illegal recording of a film. But at least getting barked at by a spotty assistant manager won’t land you a year in the clink.

In Arlington, Virginia it’s a different story. A 19-year-old woman recorded 20 seconds of the new Transformers movie to show her brother, and now faces a year in jail and a fine of up to $2,500 for her cheekiness.

The Regal Cinemas chain is adamant that she should face the music for her misdeed, but it remains to be seen whether a court will agree that a 20-second clip should be treated as harshly as an actual attempt to bootleg the entire film.