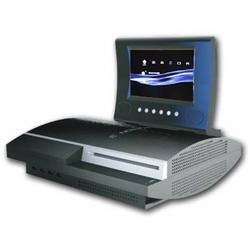 Well, you would need ENORMOUS hands, but it’s a start. Nevover Electronic has released an LCD screen that attaches to your PS3, making Sony’s console portable.

Well, you’d need a power supply, obviously, and hi-res PS3 games won’t look that purdy on a seven-inch screen, even if it does boast a high-speed refresh rate. There’s also two one-watt speakers and dual earphone jacks for sound.

Let’s face it: this is purely a novelty product, although if I could think of a way around the power problem, it’d be fantastic for causing a stir on train journeys. Although marginally more likely to get nicked than a PSP.

Related posts
Heavenly Sword PS3 game gets great review on, er, Sony’s own PS3 blog
Is Sony creating a new AIBO compatible with the PS3?
Baby you can drive my car (if you’re a PS3)

One thought on “Clip-on screen turns PS3 into a handheld games console. Sort of.”