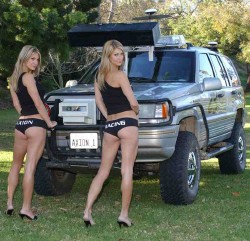 The link between console games and real-world driving is tenuous at best, although I did fail my driving test after ramming an oncoming VW Polo, carjacking it and driving off with Classic FM blaring out, stopping only to baseball-bat a prostitute to death. A major fault, apparently.

Anyway, one company that disagrees is Axion Racing, which is entering this year’s DARPA Urban Challenge with an autonomous car based around a PS3 console. Okay, so it’s backed up by a bunch of computers, laser finders, stereo and infrared cameras and twin GPS units too. But still, pretty impressive eh?

The competition requires self-driving cars to obey traffic regulations, negotiate obstacles and merge with traffic while resisting the urge to hit the Boost button or chuck turtle shells out the back at rivals. Go PS3!