When I first heard about Pleo in January’s issue of Wired magazine, I got all excited thinking about the possibilities of owning a robotic dinosaur. We’ve seen many robotic animals such as the Furby, Robosapien and Sony’s Aibo, but this Pleo sounded like a whole different kettle of fish. Err, dino.

Dreams become reality, and only a few months after the interview with creator Caleb Chung was published in Wired, it’s now been placed on every geek’s favourite boutique, ThinkGeek, to go on sale in October. Pleo the dinosaur doesn’t just look the part, he moves and reacts autonomously with both humans and his surroundings, in a ‘lifelike, organic movement’. Bit like the three-month old tofu in my fridge, then.

When Wired interviewed Chung, he explained that most robots have a jerky and machine-like quality to them. “They’ve spent $2 million and a year trying to get their robot dog to walk, and it’s still like this,” he told Wired’s Clive Thompson, proceeding to ‘twist his body into a scarily accurate imitation of a stiff-limbed automaton’, as Thompson reported. 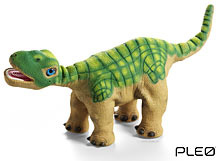 When the creator of such a beast can quite literally blow a journalist away with not only his dance moves, but his humour and enthusiasm, you know the product will be worth the wait. “It’s like, ‘Look at me! I’m a robot! I’ve got gears and motors inside me! Zzzzt! Zzzzzt!”, Thompson reported Chung as saying, who then apparently broke into a robot dance. It’s no surprise when you read on later that he used to be a mime in a former profession.

Pleo has several different development phases, where it goes through a series of evolution. Like Furbies (and babies, natch), they each turn out uniquely depending on human interaction, so better watch the slaps ’round the head or you’ll get a cranky little critter on your hands. No joke.

Stereo hearing, skin sensors and even visual object tracking with edge detection ensures you don’t just have a Furby on your hands. One thing to note for all the modders out there is that the robot actually contains a mini USB port and SD memory card slot – any ideas yet, hax0rs?

As with all good things, there is a downer, and with the Pleo, it just so happens to be the cost. At $349.99 they are far from cheap, particularly when last August Chung estimated the cost to be around $199. I guess Chung has to pay for his PRO DANCE SKILLZ DVDs somehow though!

Pleo at ThinkGeek (via Wired Magazine)