It seems that publishers' initial fears that iPad magazine subscribers would not be willing to share their personal info when buying digital reading content were ill-founded, as Apple have now confirmed 50% of all digi-mag subscribers happily offer their…

Virgin Media have released a few pics of the interface for their new Tivo-powered PVR, and very slick it looks indeed. The connected TV service will bring together video-on-demand catch up content, as well as apps and games. Shows, music…

Here's an interesting new feature from Guardian.co.uk. They've this week introduced their Zeitgeist page, a collage of popular content from their site organised by "social signals". Each article to be featured on the Zeitgeist page is first judged by the…

Fans of fake plastic guitars and drums will be happy to hear that Rock Band makers Harmonix are set to open an online store, letting anyone upload Rock Band-compatible tracks for use in-game. However, it wont come easy. Not just…

Over the weekend, you might have noticed steam pouring out of Twitter and the blogosphere as Amazon customers reacted furiously to the news that the bookselling colossus seemed to be censoring gay and lesbian content from its bestseller lists and search algorithms.

An early response from customer service seemed to indicate that this was a policy change of some sort – that gay and lesbian content had been recategorized as ‘adult’, and therefore hidden from many parts of the site. A company statement later referred to the problem as a ‘glitch’.

But what really happened, claims an anonymous Amazon employee, was simply human error from an employee in France. He had filled out a field incorrectly in the database and 57,000 items were suddenly tagged as “adult”.

Poor Amazon employees were called back from their Easter break and worked on the issue until midnight on Easter Sunday, when it was handed over to the international team. I imagine there’s a certain French staffer who’s on the receiving end of an awful lot of angry emails today.

In the meantime, let’s have a little calm when this sort of thing happens in the future, shall we? Innocent before proven guilty, and all that?

The Guardian, a British newspaper, has today launched the Guardian Open Platform. “What’s that?”, you may ask. It’s an open API for all the Guardian’s web content. More simply, it’s a way for anyone to freely use Guardian content and data for whatever they want.

You may be wondering why on earth the paper would give its content away for free, given that it charges for it in paper form. Well, the answer is that the Guardian wants to be an all-pervasive source of knowledge on the web, rather than just a site that people have to go to to get that content.

Using the new system, anyone will be able to integrate Guardian data into web applications. The Guardian, in return, gets ad revenues. For the moment, it’s limited to just 5000 queries a day, and it’s all still in beta, but with any luck the Guardian can use their strong trusted position to become the default content provider for many sites on the net.

Pay attention, because this one’s important. Web video has issues. It has issues because it’s closed, and proprietary. The vast majority of web video is delivered in the Flash format, which owned by Adobe. This means that video sites have to suffer restrictions and pay license fees. Wouldn’t it be better if there was an open source version?

Enter Theora. It’s an open-source video codec which, when combined with the Vorbis audio codec and the .OGG file format, could replace Flash as the dominant form for web video.

The value of a great interface is underrated. Many online shops look more like a spreadsheet than a pleasurable retail experience (I’m looking at you, iTunes). That’s why I’m really excited by a new front-end Amazon has created for their site, called WindowShop…

Google has long admitted that it’s having trouble making any money from its purchase of YouTube. The latest wheeze is to add clickable “Buy this now!” links on videos of buyable stuff. I’d love to show you you a less-grainy picture, but it only works in the USA so far. Check out the Amazon and iTunes links below the video.

The Goog is promising to expand the program internationally, as well as expanding the range of things it advertises next to. This scheme might also placate content owners, who will be happier to learn that there are now “Buy this” links next to the content that they own, but didn’t upload themselves… 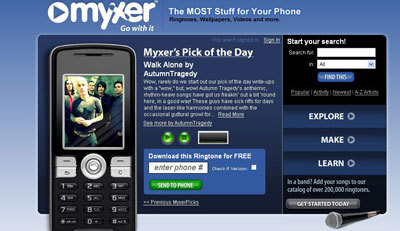 Myxer has been doing brisk business in the US – and now it’s in the UK, offering you the chance to create content on your PC, then make it available to a mobile handset.