A 19 year old from the Shetland Islands has been arrested in a raid by the Metropolitan Police, believed to be a "spokesperson" for the hacking collectives LulzSec and Anonymous. It is thought that the teen arrested is the member…

A 19 year-old from Essex, England, believed to be the leader of the LulzSec hacking group, has been arrested today as part of a joint operation by the FBI and Scotland Yard. The arrest comes just hours after LulzSec used…

WikiLeaks editor-in-chief and public face Julian Assange has been arrested by British police after an Interpol warrant for his capture was issued. However, the arrest does not (overtly at least) relate to any WikiLeaks leaked data, but instead on suspicison…

Blimey, what a week for WikiLeak's Julian Assange! First his leaked international diplomatic documents kick up a politcal and media storm, then WikiLeaks comes under attack from hackers, before being locked down by the "Great Firewall" of China. Now he's…

An unnamed 17-year-old was taken into police custody the other day in Ohio, following a threat that he’d commit suicide to an in-game Blizzard representative (known as a GM). The staffer contacted local emergency services, who showed up at the kid’s house.

The kid told the GM that “he was suicidal and the game was the only thing he had to live for”. Other people have tried stuff like that on Blizzard before, but this is the first time that someone’s been arrested over it.

Eventually he was released after a lack of evidence that he’d actually done anything illegal, but social networks and local media outlets all labelled his Facebook group as the reason. There’s now a group on the site called “Break into my place, you Gestapo wannabes. Croatia isn’t a police state!”.

It makes me glad to live in England. Our government wouldn’t randomly arrest members of the opposing political party, just because they’re saying things they don’t like. Oh… wait…

Let’s be clear here, before we start. No physical harm has come to anyone here, so before you get all “omg wtf computer games make people violent”, think again. A Japanese lady has been jailed after she hacked into a game called “Maple Story”, and ‘killed’ her virtual husband’s avatar…

And we think we have it tough. The worst thing that’s ever happened here at Tech Digest HQ is the occasional aggressive email from PR people pointing out the press release said eight megabits not megabytes, plus the odd Viagra spam comment to delete once in a while. We’ve never been banged up for saying iPhone’s better than the N95.

But if you’re blogging in China or Iran, about human rights issues or government corruption, it’s a tougher gig. According to the University of Washington’s latest report on the matter, half of the 64 bloggers…

Six former OiNK users have been arrested by British Police over the past couple of weeks, all in connection with the up-loading of pre-release to the now defunct P2P music site. 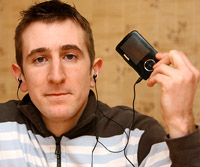 It was a “black Philips” music player, so he certainly deserved a warning to buy superior model in future – but getting held by armed cops and having his DNA and fingerprints taken is going a little too far…