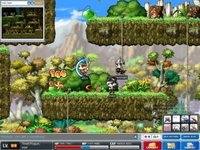 Let’s be clear here, before we start. No physical harm has come to anyone here, so before you get all “omg wtf computer games make people violent”, think again. A Japanese lady has been jailed after she hacked into a game called “Maple Story”, and ‘killed’ her virtual husband’s avatar.

The woman in question was “married” ingame to the man, but was so enraged following a sudden unexpected “divorce” that she used the man’s credentials to log in to his account and delete his avatar. The man complained to police when he discovered that his character had been ‘killed’.

The woman was arrested, carted 620 miles across the country, and has been jailed on suspicion of illegally accessing a computer and manipulating electronic data. She has not yet been formally charged, but if convicted could face a prison term of up to five years or a fine up to $5,000. The woman had not plotted any revenge in the real world, an official said.

Seems a bit strong, but on the other hand, the loss of a virtual character that you’ve poured hundreds of hours of your time into can be extremely painful. I would have thought that Maple Story would be able to restore his character from a backup, though?