Late last week, in a small office near Holborn, Microsoft showed Tech Digest Windows Mobile 6.5, and shared its vision for smartphones that the company hopes will combat Apple’s growing appetite for the sector.

At the opening of Mobile World Congress today in Barcelona, Microsoft CEO Steve Ballmer unveiled the company’s new mobile OS to the world. The new features are split 50:50 between interface and usability.

Let’s talk usability first. Microsoft’s stated goal with Windows Mobile is to make things take fewer clicks to do. Instead of clicking five times from a locked handset to reading your email, the company wants to minimise the hassle.

The next version of Windows Mobile will feature a brand new home screen, lock screen and a fresh look to the interface that echoes Vista and Windows 7. The home screen looks remarkably Zune-y, which is unsurprising given the praise heaped upon Microsoft’s MP3 player’s interface, and the recent integration of the Zune team into Windows Mobile.

The phone-is-locked screen will now allow you to unlock straight to specific applications, allowing you to move from a locked phone straight to email, text messages, voicemail, calendar and missed calls with one movement.

The look and feel of the software has been upgraded too. There’s more colour scattered around, and the scroll bars match the feel of the desktop version of the OS, rather than echoing Windows 3.1 as they did previously. 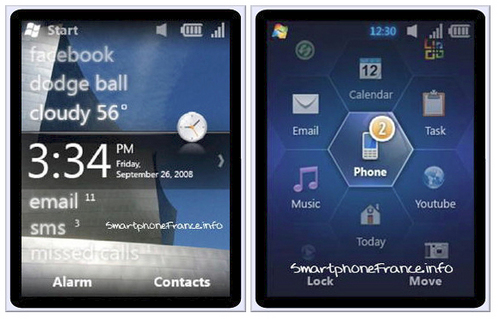 Lastly there’s a redesigned start menu – instead of a drop-down list, you now get a honeycomb of different applications. Microsoft claims that a series of hexagons makes the best use of the space, but I rather suspect that the redesign is more about making the product more visually distinct – something that Windows Mobile has always struggled with.

So how about new features? Well, there’s the previously-talked about “Skymarket”, which is now called Windows Marketplace. That will bring the 20,000 applications developed for Windows Mobile into one central place to better combat Apple’s App Store.

Microsoft told Tech Digest that it won’t exercise as much editorial control over the contents of its app store. Applications that aren’t permitted in Apples store because they compete with things that Apple itself is trying to do, like browsers, will be welcomed with open arms into Windows Marketplace. Microsoft says that the bar for entry will be based on the quality of the code, not the content.

There’s also a new version of Internet Explorer – IE Mobile 6. This will feature increased performance and better rendering of desktop-sized pages. Microsoft says that having one of the oldest browsers on the market means that they’ve learnt a lot about how to make a browser. I think it’ll be interesting to see how it compares with Fennec and Opera.

Lastly, Microsoft’s unveiled a service called “My Phone” that will act as a cloud backup of your contacts, photos, calendar items, mail and documents. It may launch sooner than the main OS, and grant a rather measly 200MB of data initially.

It’ll be free, but Microsoft suggested that more storage might be available at a price, for syncing music collections and the like. Needless to say, you’ll need to decide for yourself whether your data package is adequate for syncing photos and music, but anyone should be able to sync contacts and other text-based data.

The handset where we saw all this in action – an HTC Touch Pro, not a slow phone – crawled in the demonstration, so it looks like Microsoft still has a lot of optimisation to do before Windows Mobile 6.5 is ready for primetime. The OS is due in Q4 2009, so there’s still time, but let’s hope that Microsoft applies some of its learnings from Vista to Windows Mobile, and doesn’t release a product that’s too weighty for its own good.