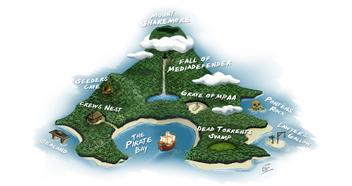 The four operators of the Pirate Bay, the internet’s premier Bittorrent tracker, began their trial today in Sweden, accused of 33 cases of copyright infringement. According to charges filed by the public prosecutor, they’re “promoting other people’s infringements of copyright laws”, a reference to the fact that the site simply links to copyrighted content – it doesn’t actually host anything itself.

Fredrik Neij, Gottfrid Svartholm Warg, Peter Sunde Kolmisoppi and Carl Lundström face a fine of £100,000 and up to two years in prison, but the real effect will be on the future of file-sharing on the internet. A victory for the Pirate Bay would set back the cause of content-owners world wide.

The Pirate Bay is calling the event a “Spectrial” – a cross between a spectacle and trial. They’re trying to make the reporting of the case as open and transparent as possible, with audio and video streams available in multiple languages.

The Pirate Bay has launched a blog – //trial.thepiratebay.org/ – though it’s currently struggling under heavy traffic, and it’s encouraging people to use the #spectrial hashtag when discussing it on Twitter. Blogs like ZeroPaid and TorrentFreak are also covering the trial in fine detail.

What I find most baffling about the whole affair, though, is that the authorities think that they can make a dent in file-sharing volumes by shutting down the Pirate Bay. If that was to happen, then 99.5% of its users would just move to another site and carry on as if nothing had happened.

Even if Fredrik Neij, Gottfrid Svartholm Warg, Peter Sunde Kolmisoppi and Carl Lundström go to jail for this, it’s highly unlikely that the site will go down for longer than 24 hours or so. I strongly suspect that the operators have backup plans in place just for that very event.

Still, I suppose the Swedish government has to appear as if its doing something to placate the content-owners whose business is crashing all around them. I just wonder if the content owners have some sense of reality about the game of whack-a-mole that they’re playing.