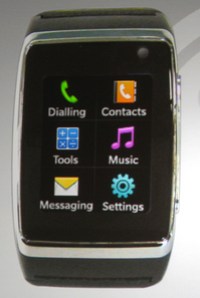 Wow, things move fast from prototype to production these days. The LG GD-910 that we saw at CES is now the LG G910 Watch Phone, and due for release later this year.

It’s got a 1.4″ touchscreen face, HSDPA, and video calling capabilities. There’s also a text-to-speech engine for reading out texts to a bluetooth headset, and voice recognition stuff too. For maximum geekiness, precede every voice command with “Computer:”.

As well as the Touch Watch, there’s also the Arena, previously written about here. We were promised specs and a release date, and by jove, we’ve got them. Or most of them, anyway.

There’s a 3″ touchscreen, running at WVGA resolution. It supposrts DivX and Xvid codecs. It can record DVD-resolution video, and video at up to 120fps for super-slo-mo playback. There’s 8GB of internal memory, and that can be expanded by another 32GB of MicroSD action. 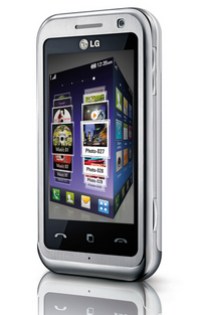 There’s an immensely joyful 3.5mm headphone socket, and the aforementioned HSDPA, GPS and Wi-Fi. There’s a 5-megapixel camera, too, and geotagging for photos. There’s a tonne of inbuilt Google apps, too. All this is packed into a 105.9 x 55.3 x 11.95mm shell.

What’s missing? Well, I’d like a flip-out QWERTY keyboard, and maybe an upgrade on that camera, but beyond that, I can’t think of too much. The Arena seems like a very capable handset. I hope that it delivers on its promise, but I don’t think it’s topping the N97 in my “can’t wait for” phone list. How about you?