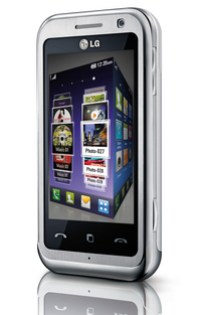 I’ll admit it’s been a while since I was excited about an LG handset, despite my love for the company’s TFT monitors. This phone might change all that, however – it’s the LG Arena KM900, newly announced in advance of its unveiling at MWC 2009.

The biggest feature of the phone is its use of 3D. It’s got a completely new UI which is based on cubes, providing a number of different home screens. A touchscreen allows you to navigate between them, but from the picture to the right, it looks clearly iPhone-influenced.

The Arena will also have HSDPA, Wi-Fi, and aGPS, but beyond that we don’t know anything more. We’ll be finding out full specs, and hopefully a release date, next week at MWC so stay tuned for that. If you want to be the first to hear, then you might like to follow @techdigestnews on Twitter. Just an idea.