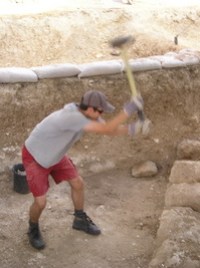 Most people, when selling on a computer second-hand, wipe the data by just deleting it. That’s not quite enough. A simple delete just removes the references to the data on the disk – rather than wiping it clean. Software available free on the net can recover it relatively easily, as long as it hasn’t been overwritten.

Which? bought eight computers on eBay and recovered 22,000 ‘deleted’ files from them in this way. Some of those files contained personal data, which could be used by identity thieves to steal your… etc etc. Yawn. You know all this.

Of course, there’s programs that’ll hard-delete data, too, but Which? prefers another solution. A big hammer. They recommend pulling it out of the PC and whacking it very very hard, until the thing’s in pieces. While I don’t doubt the effectiveness of that method, it’s a lot easier to use a program like SuperShredder to accomplish the same thing. Plus you won’t get bits of disk platter in your eye. Bonus.