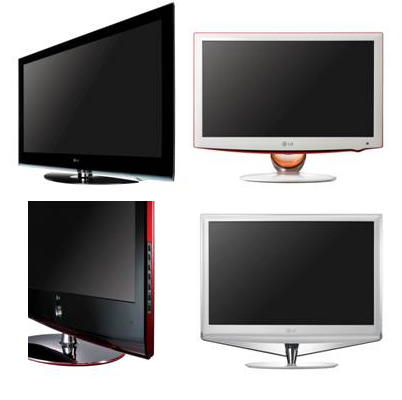 LG has decided that it hasn’t released nearly enough high definition TVs already, and so is spending this year’s CES showing off a jaw-dropping eleven new series (yes series, not just models) of plasma and LCD TVs.

So that you aren’t bored witless with every detailed specification, here’s an overview of what’s on offer.

Let’s take a look at the LCD TVs first.

The LH9500 range is currently, thankfully, only available in one screen size. The 55-inch slim wireless LED backlit HDTV is under one inch thick at its thinnest point and uses a full array of LED backlights for more precise picture control.

Next up, the LH7000 HD ready 1080p LCD TV series comes in 32, 37, 42, and 47-inch screen sizes and is a follow-up to last year’s Scarlet TV range. It features TruMotion 100Hz, integrated Bluetooth (for allowing you to beam pictures and such like from your mobile phone or laptop), an intelligent light sensor, 24p real cinema mode, and energy saving. Almost as advanced as the LH9500.

What’s next? The LH5000 HD Ready 1080p LCD TV series comes in the same four screen sizes as the LH7000, but most have TruMotion 200Hz tech (if you are really bothered about the difference between 100Hz and 200Hz), and much of the same tech as the last set of models.

The LH4000 series is, on the surface, exactly the same as the LH5000 but with just TruMotion 100Hz. Pretty much the same for the LH3000 series, though the aesthetics of the sets are different.

Phew. That’s the LCDs done. Let’s move to the plasmas.

Firstly, the PS8000 series in 60 and 50-inch screen sizes is full HD, has THX display certification and comes with the THX media director which “enables movies, music and other digital media to communicate picture and sound settings directly to other compatible consumer electronics devices, dynamically configuring them for the ultimate playback experience.” There, I copied that bit.

It also features 600Hz Smooth Motion, which is presumably very good and involves “sub-field driving”. Other features, including the energy efficiency, are much the same as the LCD TVs.

The PS6000 HD ready 1080p plasma TV series comes in just 50-inch and allows consumers to change the bezel colouring. The functional specs are much as the PS8000.

Finally, the PQ3000 series comes in 50 and 42-inch screen sizes and offers HD ready (720p) resolution. Other features are the same as the other plasmas.

So there you go. There’s only so much you really need to say about slightly different HDTVs (and this was still a long article). A few different looks, some different specs. Overall I like LG’s tellies, and it’s good that they’re still supporting both LCD and plasma technologies.

Pricing and UK availability to be confirmed.