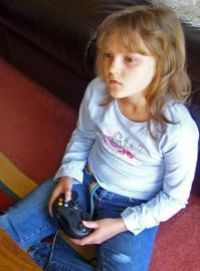 Good morning, children. Remember how I told you yesterday about a simple way of ordering 18-rated video games online without an age check? Well forget all that complicated postal order crap. A Which? Computing investigation has found that there are actually high street shops out there merrily flogging games to under-age players.

Which?’s “undercover” operation found that Woolworths, Game and Maplin are all guilty of selling the ultra-violent products to a 15-year-old girl. Hang on, does that mean a Which? operative was disguised as a 15-year-old girl? That’s sick.

Woolies apparently was happy to sell the girl a copy of Grand Theft Auto: Vice City Stories, which contains violent and sexual scenes. Game meanwhile sold a copy of Condemned 2 without question to the innocent teen. Maplin appears to be the worst offender, selling her a copy of Hitman even though the sales assistant asked the girl her age and she told him she was 15.

We assume that she was trying to buy one of the 18 rated titles in the series otherwise this whole revelation would be somewhat less sensational.

Incidentally, under the Video Recordings Act, the penalties for selling games to underage players range up to £5,000 or 6 months in at her majesty’s convenience.

In defence of Woolworths and Game, if I worked there, I would hardly be expecting 15-year-old girls to be out buying copies of GTA and Condemned 2 and probably wouldn’t think to question her age. Unless she was wearing a My Little Pony t-shirt or something.

Realising the Post Office’s error yesterday, Woolworths, Maplin and GAME will now be responding to this crisis situation by taking away ASBOs from any children attempting to buy games by disguising themselves as 15-year-old girls. Without your precious anti-social behavioural merit badges you’ll be relegated to the school nerd just in time for the summer hols. Hah. Foiled again, children.

Related posts: PEGI needs to sort its act out | Celeb-trash mags love anti-game stories so much they’ll pay you to make one up