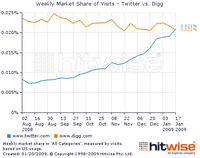 Internet traffic tracker Hitwise has reported a readership boom kicking off for mini-blog portal Twitter, with the number of visits to the “citizen journalism” gonzo reportage site topping that of Digg for the first time.

The graph generated by Hitwise – stolen by us and shown to the left there – tells the story of Twitter’s unstoppable rise, with recent high-profile Twitter events pushing user numbers to new highs.

Even Twitter itself is happy with how it’s all going, with President Obama’s multimedia inauguration causing a further spike in Twitter use. It is unstoppable, so you might as well surrender and sign up a username now, before all possible word/number combinations are nabbed.