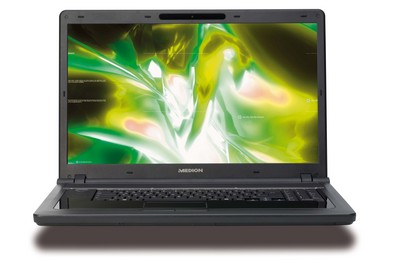 The aforementioned 18.4″ screen runs at 1,680 x 945 resolution, which the astute among you will recognise as 16:9 aspect ratio. The Dolby audio system will happily output in 5.1 surround, or alternatively you can use the surround virtualisation filter on a stereo signal to make it sound like it’s a surround source, either on a speaker system or on headphones.

Specs-wise, the machine has an 2GHz Intel Core 2 Duo T5800 processor, and 4GB of RAM. There’s a 320GB hard drive, and a dedicated 512MB GeForce 9600M GS graphics card, which can run in either full-on mode, or hybrid mode, depending on how much power you fancy using up.

Port-wise, it comes with 3 USB ports, an eSATA/USB port, an HDMI port, LAN and VGA. It’s got 802.11 b/g/draft-n WLAN too. There’s also a 1.3-megapixel camera, and touch-sensitive media controls. It comes with 32-bit Windows Vista, but 64-bit is supplied too, for those of you who want to take advantage of all four gigbytes of RAM. You’ll be pleased to hear that all the fancy Dolby stuff works fine on 64-bit Vista, too.

Last but not least, there’s a digital TV tuner built into the thing, so you can watch Freeview on the device. It comes with some PVR software, and you can record one program while watching another. No more fights about Eastenders vs Never Mind the Buzzcocks.

All-in-all, this is a decent multimedia laptop, and it’s only going to cost £800. It’ll be available from next week, from Tesco Direct, Blockbuster, and medionshop.co.uk. If you haven’t already got a computer or a Blu-ray player of some sort hooked up to your HDTV, then this comes highly recommended.

I managed to grab some video of this lovely machine, so look out for that later today, too.

Related posts: Medion GoPal P5430 – feature-packed sat nav with a 5″ screen | Medion brings 1TB of storage to the budget end of the market with its AKOYA P7300D