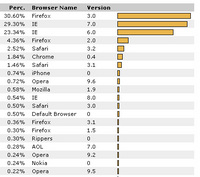 You’re probably reading this in Firefox or Internet Explorer, so it won’t mean much, but the few Chrome users out there will be pleased to know that Google reckons Chrome is now less buggier, up to 1.5 times faster at loading Java apps and has better bookmark organisation and import/export tools.

A quick browse of the Tech Digest reader stats (pictured up there) shows that only a rather poor 1.8% of you lot are using Chrome right now, compared with the 3.5% it had a week or so after it launched back in September. That’s not particularly good news for Google’s world domination plans.