Instagram will begin requiring users to confirm their birthdays as part of an effort to create new safety features for young people, the Facebook Inc-owned (FB.O) social media app said Monday. Instagram has explored building a version of its app for kids under the age of 13, prompting lawmakers to urge Facebook to drop the plans,…
30th August 202121st July 2022 Chris Price News

Birthday candles are a bit twee really, aren't they? Sure, when you're a kid their little dancing flames and blown wishes seem magical, but they sort of lose their appeal when you start chain-smoking 40 a day. By that…

Plenty of reasons to celebrate over at YouTube HQ today. Not only is it the 5th birthday of the launch of the service's beta site, but the video streaming site has also announced a massive landmark in that its…

Our favourite digital music service, Spotify, is three years old today. That seems like a lot, considering we’ve only been able to use it in the UK since October, but in that short time it’s already completely changed the way I listen to music on my PC, and made me listen to a much wider range of bands too.

To celebrate the anniversary, as well as the 40th birthday of founder Martin Lorentzon, the company has put up a blog post that talks (in somewhat vague terms) about the future direction and plans for the company.

There’s a lot of hints in the blog post about mobile devices – something that the company hasn’t been keeping very secret. Intriguingly, though, the company also mentions set-top boxes, IM, and social networks as future directions for expansion.

Spotify mentions, too, the possibilities of enhanced social features and pre-release content for premium users – something that could drive greater takeup of the subscription service. That gets interesting in the comments section – with several people saying that if the fee was halved, then they’d pay it. I wonder if they’d get twice the takeup if they chopped the price in half.

The most exciting bit, though? The closing sentence of the post – “We plan to have more detailed information for you in the next few weeks, stay tuned”. If I were a betting man, I’d put money on that being the iPhone application that we revealed in February, a leaked video demo of which is posted below.

Welcome to Tech Trumpet, where I attempt to make vaguely musical (and festive) sounds using a variety of gadgets and computers.

This week, by way of a very understated celebration of the Apple Macintosh’s 25th birthday on Saturday (today is when the iconic “1984” SuperBowl ad was shown), I’ve composed a short piece based on Mac System 7 operating system sounds…

You’re probably reading this in Firefox or Internet Explorer, so it won’t mean much, but the few Chrome users out there will be pleased to know that Google reckons Chrome is now less buggier, up to 1.5 times faster at loading Java…

The beast over to the right there is the Motorola DynaTAC 8000X, which received approval from authorities exactly 25 years ago. It would have set you back US$3,995 at the time and it weighed 1.75 pounds. To give you some frame of reference, that’s the same weight as 5.3 human kidneys, 14 tennis balls, or 6.2 iPhones… 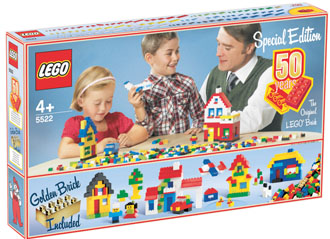 Another Lego story for today, you ask? Well, it *is* their 50th birthday, and we’re usually in the habit of being nice to OAPs, so here’s your chance to hear about their limited edition anniversary set….