Here’s HP’s netbook, the Mini 2140. It’s really rather nice, packing a good size keyboard, 10.1″ screen and 80GB SSD. Decent price, too – but I’ll let Zara reveal that one. Check out the video above to find out.

For more CES coverage than would fit on an 80GB SSD, click through to our index post.

You’re probably reading this in Firefox or Internet Explorer, so it won’t mean much, but the few Chrome users out there will be pleased to know that Google reckons Chrome is now less buggier, up to 1.5 times faster at loading Java… 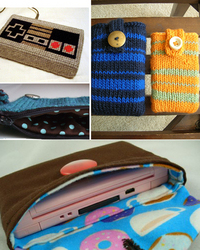 It’s approaching Winter, which means your Nintendo DS is getting chilly and needs rugging up. What? I’m not the only one who anthropomorphicises (it’s a word!) their DS, am I? Talks to it, dresses it, hugs it, makes sexy time with it…

Obviously I’m lying about the latter part, but dressing your portable games console is pretty fun, especially when there’s so many brilliant handmade efforts floating around teh interwebs. Abi at Crafty Crafty has created a top 10 list of all the best DS cases…

Back from a few days’ holiday over in Lowestoft, on the East coast of England, I’ve gained not only a lot of sunburn (curse my parents and their fair-skinned genetics!), but also a lot of wisdom in regards to just what you should pack for a good few hours’ worth of lounging in the sun…