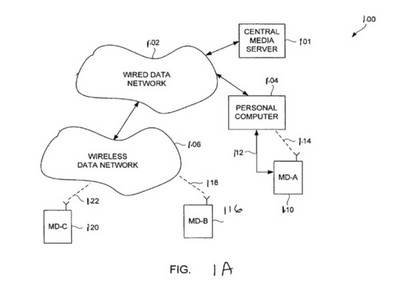 An interesting patent has turned up that suggests some new features we could be seeing in the next generation of iPods and iPhones. A rather crude diagram explains how Apple want to be able to let you share your iTunes library with your devices over the internet.

The diagram seems to suggest that Apple is working on the technology to allow you to dial into your iTunes library at home from wherever you are, and stream tracks over the air, either via WiFi or 3G, meaning that this could be the end of moaning about the lack of storage space on the iPhone… Well, if you’re in range of a wireless network, anyway.

In other words, it will do what Orb users have been doing for years.

There’s also speculation that this could also mean iPod-to-iPod communication and wireless syncing (which Apple don’t really have an excuse for not having already).

Whether this will all actually happen though is unknown. Tech companies will often make tonnes of patent requests just to make sure their rivals don’t get there first. So, let the baseless speculation begin!