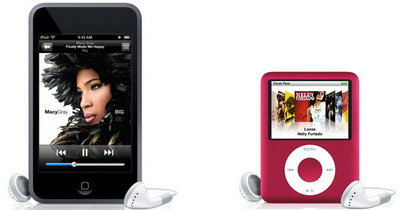 The relentless onwards march of technology looks set to continue apace as rumours have surfaced about the next iPods – an upgraded iPod Touch and Nano.

The rumours began when references to an “iPod2,1” were discovered in the code of Apple’s beta 2.1 firmware for the iPhone. This has especially come as a shock to me as I assumed that Apple simply had no plans to add yet another device to their highly lucrative iPod line.

Whilst there aren’t any concrete details at the moment, this has never stopped the pundits baselessly speculating before with rumours of the new iPod Touch being upgraded to 64GB and, slightly perplexingly, gaining GPS to match the new iPhone. Whilst this does seem like a great idea on paper, because the new iPod won’t have a phone built into it, you’ll presumably have to be in range of a Wi-Fi network in order to download the maps to figure out where you are.

For the Nano, rumours are suggesting that it’s going to get a whole lot taller and thinner than it’s fatter, older sister. Apparently it’s going to have a widescreen, er, screen, just like the Touch does. Phwoar.

The best bit is that a price cut could be in store, meaning not only will you get a top-notch music player for less cash, but you’ll be able to indulge in some shardenfreude and enjoy watching the early-adopters have a bit of a cry as the moths fly from their wallets.

Expect Apple to officially announce something in September.

Related Posts: Apple MacBook Rumours | The iPhone won’t go on to Orange, get over it