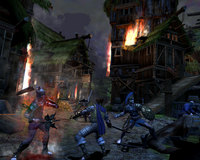 Veteran MMO developers Funcom are about to launch their most ambitious online world to date, Age of Conan: Hyborian Adventures. It’s already off to a good start -800,000 fans have actually ticked the ‘Yes, I would like to be bombarded with junk mail’ box (so did I, actually) and have signed up to the newsletter, and over 1 million players have reportedly signed up to the open beta phase.

Funcom believes this to be the biggest beta test phase sign-up figure in history.

For a bit of extra revenue, Age of Conan also offered players who pre-ordered the game a chance to get in a couple of days early for a small fee. However, even those places have now sold out, according to an official forum posting, so you’ll jolly well have to wait for the proper release date.

AoC is inspired by the Robert E Howard stories, once brought to the big screens by Arnie in a decidedly love-it-or-hate-it rendition of the fantasy adventurer. These figures are clearly an excellent start for the new MMO, which is actually launching into a pretty hostile environment.

Blizzard’s world renowned title, World of Warcraft, is still easily holding on to its leadership position, so it’s an extremely tough time to be launching a direct rival. In the past year, a number of other MMOs have come along to try their hand at the massively multiplayer market but few have experienced the success they perhaps could have if Blizzard’s monster franchise wasn’t dominating so completely.

Funcom’s attempt might be different. AoC has a number of tricks up its sleeve to differentiate itself: firstly, its attempting evolve MMO gaming beyond the dull repetitive combat suffered by the majority of online RPGS. Combat is now a bit more of an active affair through directional attacks and combos into the mix and very much not reliant on just auto-attacking.

There is also a larger single player story line that means you can keep mostly out of the way of the stereotypical mob farming until you’ve reached a reasonably high level.

However, in the end it is still very much a swords and sorcery online adventure, and so will be drawn into direct competition with WoW off the back of that alone. But WoW has been at the top for a long time and is starting to show its age. AoC’s DirectX 10 graphics and evolved gameplay could be enough to draw old WoW players away although any kind of landslide movement seems extremely unlikely.

Age of Conan (via Reuters)