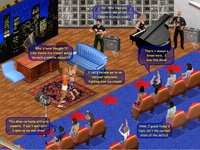 There probably isn’t that much of a crossover between The Sims Online (recently renamed the beyond abysmal “EA-Land”) players and those keen on signing up to a beta test of new MMORPG Stargate Worlds, but you never know.

EA announced the closure of EA-Land this week, to the sadness of the few young girls and odd men who are still hanging in there. The doors on the once-promising Sims Online universe will close forever on August 1, 2008.

But, as in nature, one death is always replaced by a new, glorious birth! Publisher FireSky has announced that preliminary registration for its beta test of MMO Stargate Worlds has “gone live” this week. The two developments are not really linked, we’re just saving you having to read two separate stories about MMORPGs today by combining them here.

So, as the leaves fall dead from the trees, so the new seeds germinate in the soil below to one day replace them. As in life, as in the world of MMO gaming.