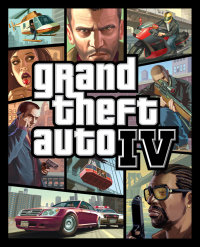 With gaming no longer the bedroom pursuit of adolescent boys who should really get out more, the movie industry is starting to get a little nervous about what it’s doing to the box offices. Variety magazine has now put a figure on what is gearing up to be the biggest game launch in the history of gaming: $400 million. And the fear is that this is one $400m that won’t be going into the pockets of Hollywood execs like it’s supposed to.

The number has been drawn from “sources close to publisher Take-Two” (guess work) and is based on the number of units pre-sold to retailers. But basically, it’s plain to see that Grand Theft Auto is up there among the biggest game franchises in the world, it’s making its debut on the current console generation and not one early look at the game has had anything but gushing praises for Rockstar’s efforts. It is also coming out on two systems, unlike last year’s massive hitter, Halo 3. So yeah, it’s gonna be a big one.

The $400m figure would put it right up there with big budget movies like Pirates of the Caribbean – another timely reminder that yes, there is another entertainment medium out there and it’s becoming very popular indeed. In this particular case it has a huge advantage because you don’t have to sit through two and a half hours of crap you’ve already seen twice before.

The aforementioned Halo 3 is the current record holder for first week earnings in the video game world ($300m) and at the time its success was blamed for the failure of that classic Ben Stiller movie, called… called… um… something or other. I bet it was great though.

Because Hollywood though that Ben Stiller movies were the absolute pinnacle of visual entertainment, it is nervous now because a proper Hollywood blockbuster is coming out at the same time as GTA IV. John Riccitiello, CEO of Electronic Arts, is out there catalysing this fear by stating that GTA IV is going to destroy Iron Man. I’m not so sure though.

Grand Theft Auto IV is a pretty big game. It’s rumoured that you can get nearly a hundred hours from the single player mode and that’s before you even get online. Even if you went on a massive GTA IV binge, holing yourself up in your tiny bedsit and dieting on a feast of salty snacks and soft drinks, you would still have plenty left to play when you finally emerge blinking and malnourished into the real world again.

Most people really aren’t going to do that. They’re going to want a break or two, maybe go out for some drinks, perhaps catch a movie. I hear that there’s this rather good comic book adaptation coming along that stars Robert Downey Jr.

Much though I’d like to see the popularity of video games send the Hollywood fat cats cowering in their gigantic mansions, I think there’s space enough for the both of them. Though the demographics overlap, the box office and the video games console serve two very different functions. That said, I’m not going to be watching some lame ass comic movie come April 29th. I’ve got a three day appointment with my TV and a bag of Doritos the size of an adult Rhino.

GTA IV (via Xboxer and GameSpot)