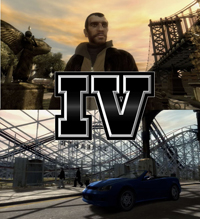 I wouldn’t watch this if I were you because it just doesn’t help. There’s some person out there who’s managed to get their hot little mitts on a copy of GTA IV for the Xbox 360 and rather than keep quiet about it, they’ve made a little teaser video to get everybody all hot under the collar. The bastard.

It’s not even like they’ve included any gameplay. All you get is the unwrapping, the credits and the loading and then it stops! The soundtrack seems good, well one song of it. The credits look professional but all I was trying to do was look for clues as to where this wind-up merchant might live. So far, I’ve got that they shop at Ikea, so that narrows it down to a quarter of the planet.

If it’s any consolation, at least they’re playing it on a really poxy screen.

Right that’s it, I’ve had enough. I’m just going to drink enough Rohipnol to cover the next 15 days. Goodnight.

Update: It was a fake. Tom Bradwell, editor of Eurogamer, is a man fortunate enough to have a genuine bona fide copy of the grail that is GTA IV and he says the intro looks nothing like that. So, call off the dogs for the Ikea shopper, just rock up at Eurogamer and get the thumb screws on Tom instead.

Related posts: GTAIV out in two weeks – get queuing | GTAIV/PS3 bundle confirmed at £299.99

One thought on “GTA IV intro and credits video on YouTube – spare me the madness!”