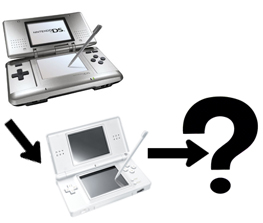 According to virtually every tech or gaming-orientated blog on the internet superhighway, come July the rumour is that Nintendo will be announcing the next-gen DS console at the E3 expo.

As someone who’s rushed out and bought both previous incarnations of the portable gaming console, I can appreciate the huge lead made between the two, and as much as I adore the Lite, I can think of a couple improvements I’d like to see in the next version, which is rumoured to be called the ‘Liter’ or ‘Extreme’.

The rumour mill has already started grinding, with fingers being pointed at ‘larger screens’, with both possibly being touch-screen, and the hardware being ‘lighter and thinner’. So far, the DS fans aren’t really thinking outside the box, so if you read below, you’ll see my hopes for the next version…

1.) Flash memory – I know that game saves etc are saved onto the game cartridges, but if the DS took a few pointers from their rival the PSP (read on below), then they’d be needing a good 4GB of storage capacity at least.

2.) MP3-playback facility – sure, you can get external add-ons that will enable you to play media on your DS, but wouldn’t it be better if it was integrated?

3.) HSDPA chip – it’s not ever going to happen, but goodness, can you imagine? It already has Wi-Fi, so you can use the Opera browser when in hotspots, or play against your friends, but inbuilt HSDPA would allow you speedy web browsing without the need to be lurking outside Coffee Republic. A collaboration between Ninty and a mobile network would prove lucrative, allowing for a cheap monthly subscription to the web ‘n walk style internet service.

4.) An email client – not necessarily Outlook, it could be similar to that of your mobile handset’s application, where you could send and receive mail from any account.

5.) VoIP – Nintendo demoed this at E3 in 2005, however we haven’t seen it since. This blog has a good round-up of various hacks to install VoIP on the DS, but wouldn’t it be great if the DS 3.0 contained actual Nintendo-approved VoIP? Like, Skype perhaps?

6.) Mini USB port and SD card slot – currently, there’s no way of uploading your own data onto the DS, because so far, the aforementioned ideas haven’t existed. A port and slot would let you whack on your own media, and you could also charge the DS by connecting the DS to your PC port.

7.) Haptics or at least inbuilt rumble – you can buy an external ‘Rumble Pak’ and insert it in the GBA slot, but whilst inbuilt rumble would be great, what about haptics, like the iPhone has? Little jolts of feedback every time you touch the DS’s touchscreen! Sure, it may detract from your gaming experience, but you could turn it off too, if Miyamoto decides to put the feature in.

8.) Adobe Photoshop and Illustrator – what, you mean you don’t want to be designing on the fly? Shame on you. Think of the improvements you could make to your Mii. Did I just say Mii, on the DS? Read on…

9.) Integration between the DS and Wii – just look at the PSP and PS3, and the potential that lies there! Wouldn’t you love to have that network in your Nintendo-friendly home? Your Mii could live in both your DS and Wii, wherever you’re playing at that moment, and partake in DS games and even be your avatar on Pictochat!

10.) Shigeru Miyamoto sim game – tell me I’m not the only one who wants to stroke Shigsy’s fluffy little head? Cuddle him? Reminisce over the old days, chat about his work on Donkey Kong, Legend of Zelda, and Star Fox? Caress him lovingly…? No?

Any other ideas on the wonders the possible next-generation DS could contain? Leave your ideas in the comments field below…