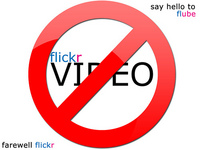 Considering that the internet is supposed to be a bold new technology frontier taking society to exciting, un-thought-of destinations and opening up a myriad of possibilities for interaction, exploration and experimentation, its users can a right old load of luddites from time to time.

Scarce days have passed since Flickr upgraded its service to include a new video feature, and already thousands upon thousands of users are up in arms, demanding that the feature be removed again. One of the main groups – “We say NO to Videos on Flickr” – has gathered over 23,000 members already.

Their main complaint is that the introduction of video content is slowing the site down, which, if true, is probably not a bad gripe. Their other whinge is that they believe introducing video is leading Flickr down the road to social networking and turning it into a YouTube knock-off.

Flickr’s creators claim to have put a lot of thought into how video can be used to enhance the photographic heart of the website. For example, clips are limited to 90 seconds in length – nowhere near long enough to really incur too much YouTube like nonsense. Second, only Pro users paying their $25 per year subscription can upload video.

I admit that I wouldn’t be that thrilled if as a Pro users I thought my money was going to add features I didn’t want, but are we really so narrow minded to think that every video sharing website HAS to end up like YouTube. I’d say YouTube’s got its niche very well covered, it’s about time we see what other angles can come up with.

Flcikr’s staff aren’t really bothered though – they’re sticking to their guns. A statement posted in the forums read: “”We’re sorry, but video is here to stay. We’d love for everyone to give it a shot. We’re very familiar with the passionate response of our members. We can’t be afraid of that. We need to continue to improve, release new features and iterate.”