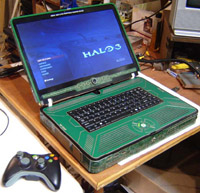 You may well have heard of Ben Heck before – he’s regularly the source of amusement and amazement for gamers across the world, thanks to his love of ripping apart games consoles and rebuilding them in exciting new formats.

Like that thing to the left there. It’s a standard Xbox 360 Elite, only transformer-ised into a green laptop, complete with HD LCD screen and keyboard for chatting with fellow clan members about which Halo map you’re going to play tonight.

Thanks to the new-hardware-using Elite having an HDMI socket round the back, Ben hooked it into an HDMI-to-DVI converter in order to get the finest-possible picture on the laptop’s monitor. He also did loads more very complicated things to do with forming plastic and rewiring circuit boards.

Full details on Ben’s latest project can be found on his personal site. He’s that big nowadays he’s registered his own name.