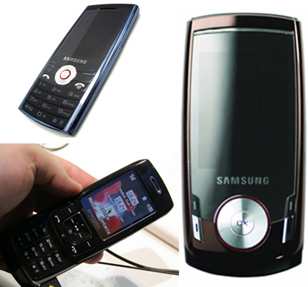 We’re still in disbelief over how disappointing Samsung’s collection of phones is for MWC – even with the Soul in mind – and these models shown, the L770, E251 and i200 don’t disappoint in the disappointment stakes. It’s just so disappointing. Get the picture?

Clockwise from top left, the i200 has some nice 3G power hammered into the candybar casing, along with Windows Mobile 6, a 2-megapixel camera, and microSD slot. With a slightly larger screen than usually seen on a ‘budget’ phone like this – 2.3″, it should be out in Spring, for around €200.

The large plum-coloured L770 is getting higher in the price-tag wars, at €260-280 when it hopefully launches in April. Again, it’s fairly simple with just a 2-megapixel camera, radio, and UMTS, or Universal Mobile Telecommunications System, a variation of 3G technology.