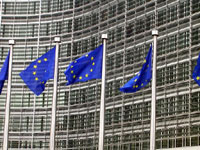 The European Union is looking into another two Microsoft anti-competition issues, it said today, with the usual hot potatoes of aggressive bundling and software interoperability coming under fire from the Brussels-based freedom fighters.

At the centre of the new EU competition worries is the way MS Office interacts with rival products (ie, it often doesn’t), plus the way some of its products are locked down and force users to use Internet Explorer. Someone in Brussels really doesn’t like MS very much. Probably had a bad experience with Windows 2000.

MS has already had to tweak Vista to keep the EU brass happy, plus when MS last tangled with the EU over similar problems it went pretty badly – the world-crushing tech company was fined almost 500 million euro for the whole Internet Explorer bundling-with-Windows fiasco.

And the EU’s on a tech-beating roll – last week it shamed Apple into reducing the price of UK iTunes purchases.

Hopefully the EU boffins can also have a word about Vista in general while they’re at it. Can we go back to just having XP on everything again, please? Surely forcing everyone to suddenly not have enough RAM any more because of Vista is against some sort of EU rule?