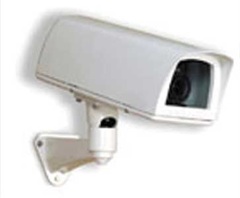 Given the widespread voyeuristic interest in the generally mundane lives of people caught on camera, with the occasional smidgen of titillation for good measure, it’s hardly surprising that videos like this make in on to the Web. After all, they’ve been used as the content of cheap TV programmes for years.

It does make you wonder quite where your image is going to end up, though. Given that most urbanites are filmed numerous times each day, there’s a high chance that your actions (if amusing enough) could end up on YouTube for millions to giggle at.

Given how easily our personal data seems to disappear, why not CCTV footage too?

You could always start walking around wearing a balaclava, though that could present a whole new set of challenges.

Related posts
Opinion: Why we should all smile as stars of CCTV
Forget CCTV: Get set for unmanned laser surveillance
3rdi – CCTV-like security using your mobile phone