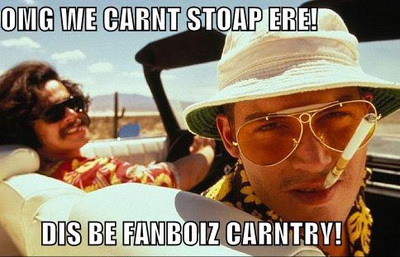 CES isn’t just about the top products and big companies. It’s about the quirky stuff – the gadgets that make you chuckle, or make your jaw drop in stunned disbelief. The products that make you go ‘aww….’. And the crazy dancing Bill Gates lookalikes in grimy rawk dives. With that in mind, here’s ten products and/or sights that’ll stick in our minds.

2. We marvelled at the dance moves of the Bill Gates-alike at Rock-eoke (while weeping at his rendition of Soul Man)

3. We wondered why someone would create robots based on clapping penguins and attacking ducks…

4. …But we did fall for WowWee’s Alive wild cub robotoys

5. We sniggered like schoolboys at the thought of a Wii joystick called ‘The Shaft’

6. We clenched those muscles again at the thought of urine-powered batteries

8. We thought we’d never buy a Mr Clock Radio robot, until a bunch of ’em sang to us

9. The Zoombak A-GPS dog tracker sounded cool, but we wondered if we’d get away with attaching one to our cat

10. The Xbox 360 Hummer initially impressed us, until we pondered the likelihood of getting a red ring of death at full speed on the M4…